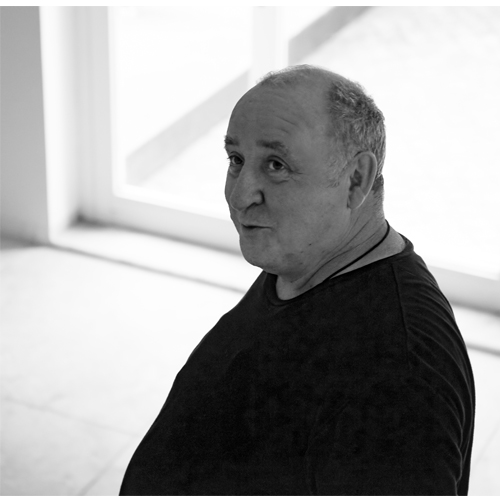 Robert Schad was born in 1953, at Ravensburg, Germany, beginning his studies in 1974 at the Staatliche Akademie der Bildenden Künste, Karlsruhe. Currently, he lives between Larians, France and Chamosinhos, Portugal. Throughout the years he has been awarded with several scholarships such as the Scholarship from the German Academic Exchange Service for professional participation in the School of Fine Arts of Porto (1980-1981) and several prizes like the Drawing Prize of the III Contemporary Art Biennial, Vila Nova de Cerveira, Portugal (1982).

Robert Schad sculptures are created using solid square steel bars. However, his characteristic lines are not the result of bending or deforming the steel, but are instead brought about by welding together straight elements of differing lengths that later resemble organic joints once the welded seams have been ground down. Schad crafts his sketch-like movements in broad sculptural sweeps and arcs, which let the physical heaviness of the material appear weightless.

He is the author of several individual sculpture and drawing exhibitions, participated in numerous multidisciplinary projects, especially of sculpture and dance, and created several public works, among which are the sculpture “Tirsa” in Santo Tirso and the High Cross from Fátima Sanctuary.