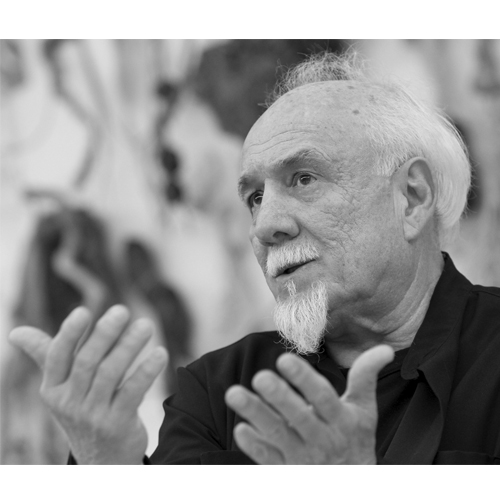 Fernando Casás was born at Gondomar, Spain, in 1946, and moved to Brazil when he was still a child, where he began his studies at the School of Industrial Drawing of Rio de Janeiro, in 1969. In 1989, he returned to Galicia, and was awarded with the Prize Ibeu/Brazil-United States with “Amazonas, Série Negra”. He is a sculpture professor at de Faculty of Fine Arts from the University of Vigo, since 1991.

Since the sixties, he has developed a work that is often ephemeral and always linked to memory, energy and the passage of time. With a conceptual profile, his work presents itself as a constant dialogue with Nature, being considered one of the precursors of the Art & Nature movements. His work is difficult to contextualize, since he abandoned the circuit of commercial galleries and the traditional rules of art many years ago, not being limited by the materials, genres, or impositions of the contemporary world. More ethical than aesthetical, his work results from three parallel and recurring forms: the dematerialized side (sensations of a moment that is not repeated); ephemeral work (small forays into the environment); and formal works (through various plastic supports ranging from the use of worn material to new technologies).

His public art is a dialogue between formal works, usually stone or foundry, and nature, such as live trees, and can be seen in Spain (Santiago de Compostela, Pontevedra, Bayona), in Israel (Jerusalem), in Portugal (Carrazeda de Ansiães and Santo Tirso), or in Brazil (Rio de Janeiro – Parque da Catacumba). In Brazil, he exhibited at the MAM – Museum of Modern Art of São Paulo (1991), at the MAM – Rio de Janeiro (1984) and at the 21st International Biennial of São Paulo. He exhibited in several places, individually and collectively, such as in Spain, Switzerland, Netherlands and Portugal. In 2014, he held an exhibition together with the Portuguese sculptor Alberto Carneiro, in celebration of Proyeto Huesca’s 20th Anniversary: ​​Arte y Naturaleza.