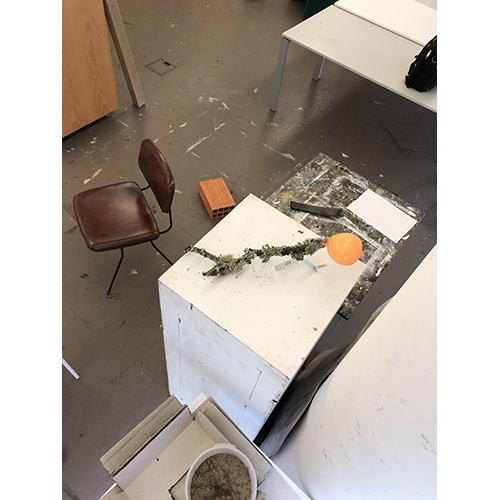 Padrão – pattern, in the broadest sense of the word – is the title of a temporary exhibition showing the place of intersection between the imaginations of a group of students from the graduate programme in Plastic Arts & Multimedia of the University of Porto’s School Fine Arts, and the archaeological heritage contained in the Abade Pedrosa Municipal Museum / International Museum of Contemporary Sculpture.

The first edition of “Deslocações”, an artist residency programme developed for the past two months, has sought to explore, both theoretically and plastically, the notions of land occupation and landscape transformation, as well as vestiges and immaterial evidence, thus paving the way for a diversified corpus of experimental projects in order to establish a dialogue with other ancestral legacies.

Temporary residence in a different place leads to the suspension of routine, a change in everyday habits and thoughts. It demands a break in a previous plane, giving rise to a new space of relationships, a contact zone open to the other, the unknown, the unpredictable. A new situation makes the wish to be reborn overwhelming. To start over.

Our first climb to Mount Padrão was an unforgettable event. The unfamiliar hilltop sharpened our awareness and induced a deeper state of perception, which allowed us to notice minute details and things taking place at the edges, almost out of view. This hill, roughly 450 metres above sea level, has been a strategic vantage point for thousands of years, since the first Castro cultures and the Roman occupation to the present. There we find traces of an ancestral presence, whose denseness establishes a relationship with time that is beyond today’s speed and impermanence. Time becomes thicker through the stratified accumulation of sediment which, instead of spreading horizontally, gains vertical depth.

This exhibition dares us visit a place of reunion, an interspace that we can fill with our fantasies and imaginations and, above all, accept as play, irony or even transgression. The rooms in the former hospice of the São Bento Monastery, later used for the scientific interpretation of archaeological findings, are now “contaminated” by the presence of other findings, made not by the archaeologist but by the artist’s imagination.

Padrão is not only the framework, but also the testimony of a presence characterised by the coexistence of two fields, art and archaeology, that have always been magnetically attracted to each other.