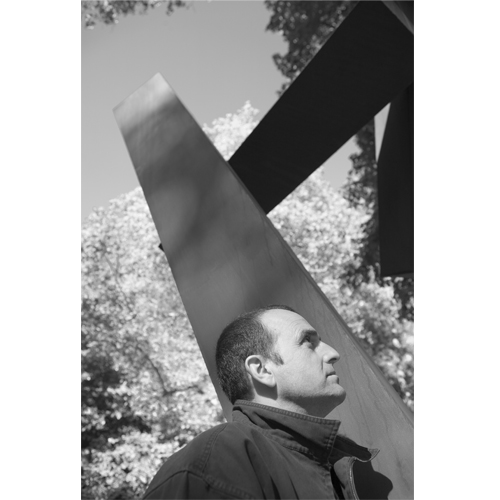 Ernesto Knorr was born at Vitoria, Spain, in 1957. His first incursions in the artistic world materialized through ceramics, a medium that he still uses to make models that precede the production of his works. Throughout his artistic career, however, Knorr has been using several materials, namely wood, plaster, bronze and steel, which in its three different forms – natural, painted or corten steel -, is the most suitable to imprint on his sculpture the poetic qualities necessary for the game of occupation of space through the creation of volume.

Ernesto Knorr has a very personal sculptural language, which contains four characteristics that define it: balance, tension, movement and contrast. The balance that arrives in an intuitive way conveys the harmony of the sculpture. The tension is greater as the volumes are closer to contact with each other, without actually touching. The movement, with an improbable disposition of the masses, as if they were crystallized in time, questioning the force of gravity. The contrast between the heavy and the light, the void and the matter, gives the sculpture a greater emotional charge and allows a variety of points of view.

He participated in numerous exhibitions, individually and collectively, in several museums and institutions, in Portugal, Spain and the United Kingdom, and is the author of multiple public works, in Spain and Portugal (Santo Tirso).