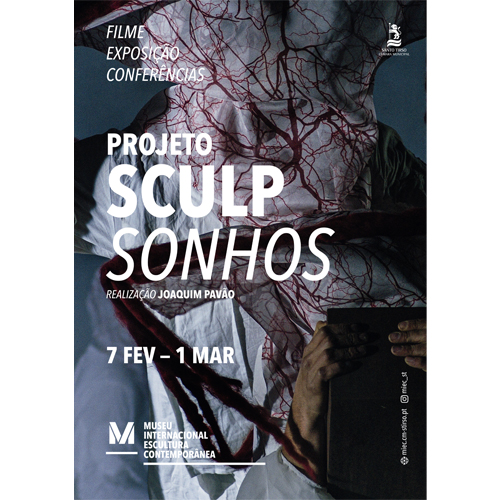 SCULP is a cinematographic piece created by Joaquim Pavão around the sculptures contained in the collection of the International Museum of Contemporary Sculpture – MIEC.

SCULP shows a dystopian world, where humans fight for survival on Earth and most people’s free will has been replaced by “the right will”, as defined by a small group of individuals and communicated to each person through an algorithmically generated voice.

Two cinematographic pieces to be enjoyed in different ways.

The result of a MIEC commission and destined to museum goers, SCULP_SONHOS may be viewed from beginning to end, as well as stopped, interpolated or restarted at any point. It works much like a book of poetry, that can be randomly opened on any page in order to read one passage at a time. Every scene has its own life and force, and all of them together are like cells making up a dystopian body. There are references to the fictional universe put forward in the feature-length film, short dialogues and monologues that suggest rather than explain. Here, more important than the narrative is the power to challenge viewers through suggestion and feelings of disquiet.

SCULP is a feature-length film to be distributed through national and international movie theaters, as well as other distribution channels. Aiming at a wider audience, the film tells the story of the inhabitants of a survival system, created by humans in an apocalyptic situation, in which free will has been replaced by a universal “right will”. The entire setting is made up of the MIEC collection and spaces.

2020-22 | National and international distribution of SCULP_SONHOS throughout museums and art festivals. Application to other sources of funding for the completion of SCULP feature film.

Dates to be defined | Conclusion, release and distribution of SCULP feature film.

Álvaro Moreira – Curator of the SCULP_SONHOS exhibition | Director of MIEC.

Motto: “Those who cease to love the original form to love its reflexion or its duplicate hate themselves” (Judah Abravanel, Dialogues of Love)

Glosses: to be born, to eat, to play, to build, to observe, to breed, to die.

Sculpture is perhaps defined through the dialogues it establishes with its surroundings. Therefore, it is necessary to question, first and foremost, what the city is, and with that, what are then the mountains, the “terrain vagues”, the buildings, the territory. Is this pre-existing amalgam a sculptural complex too? Are the buildings statues? Are the streets installations? Are the landscapes pictorial compositions? Are the people wearing certain clothes, moving in a certain way and using certain objects, aesthetic creations of themselves? If so, sculpture is just one more human creation in the city, which we see as an improvised scene, a play with no protagonists. If not, we give sculpture the protagonism of the work of art, in which the park, the garden or the street are the pedestals and the surrounding landscape the stage, making the piece unique in the midst of collective anonymity. It makes us want to stop time, looking at the backlit buildings that are reduced to an outline, their windows and their features turned into an unidiosyncratic blur. Looking at the morphology of the creative gesture against chaos. Sculpture fills the stage of the city with its monologue.

That is when people – listeners – appear. The piece alters their everyday routes, stands in the way, poses questions, it is impertinent, forces them to get around it.

Occupying space implies changes in time and, for that evidence to be more than just words, it is necessary to pause; to have the courage to come to a halt, make a detour, delay arrival at the destination; to listen to the piece so that it may break free from itself. The sculpture, like all other beings, is born in order to stop being what it is. That is why pausing does not result from a whim but from an urgency. An unquestioned artwork stays there in the middle of the city, shouting to itself. Only bodies can save it, through their interplay of movements, keeping the five senses sharp in that untranslatable dialogue that we call “enjoyment”.

And then sculpture becomes landscape because it is the scenery for a reunion. It turns into a building or a street, because it is an integral part of the city. It turns into people because it speaks. It is through this way of inhabiting the city that the piece exists, for the time it has left until its decay and oblivion, alive because soon to be dead, strong because perishable. It is, after all, in transit, like us.

Sometime in the future, the human race is on the brink of extinction due to the development of multidrug-resistant bacteria, climate change and international armed conflicts. As a last survival resort, technology becomes endemic to human life and gradually takes the place of individual free will. Any land demarcation, control or ownership is forbidden. Nations are abolished, to be replaced by a universal, totalitarian State.  In that State, a System run by algorithms determines each person’s role, options and actions and controls their social existence for the preservation of human life, its reproduction and the continuity of its rule over the planet.

Although thoughts and emotions are also induced and manipulated by the Algorithmic  System, knowledge of the brain and technological evolution does not yet allow for total control over that dimension of the individual. And that is where a sparkle of freedom may be found.

In order to control that potential unpredictability, the System watches closely over each person, classifying those who challenge algorithmic decisions as unstable. They are kept under surveillance and forced to go through several mind manipulation processes. If they continue to show signs of disbelief after those treatments, they are invited to peacefully unplug from the System.

Any type of union among individuals must be avoided, which might give rise to future rebellions. Total banishment of emotional and sexual intercourse is under way. All human embryos will be obtained through in vitro fertilisation and developed outside the uterus, in an incubator.

Bel is a woman hiding within a “bubble” that she has made for herself. A high-level employee, she works in the screening unit, identifying the unstable ones that will have to leave. Appearances are not important to her, but it is in appearances that she finds the balance that allows her to go on living. She is, in all appearance, alright.

Bel has gone through several types of violent situations in the past, but has never processed her grief or turned it into a creative force. On the contrary, it is lodged in her as a pain, an annoyance, a voice that she tries to hush.

At the beginning, the System was a safe haven for Bel. She helped build it, like a menial worker who does not want to know the overall design of the construction. She is not interested in its architecture because, deep inside, she is afraid of its flaws. She would rather not think that the roof may collapse, she prefers to lie to herself.

As the System is still not capable of controlling people’s all emotional complexities, it has not been possible to completely numb their feelings and their capacity to feel empathy towards others. It was that capacity that largely accounted for past unhappiness.

Even if discreetly, Bel lives in permanent psychological contradiction with the work she does. And that was one of the purposes for giving her that assignment: after showing indifference for others, she would eventually feel the same for herself. However, during the surveillance process she was submitted to, several contradictions, doubts and inconsistencies were found. In Bel’s case, the manipulation techniques had failed.

At this moment of profound unhappiness and loneliness, Bel meets Spes. He comes to talk to her when she is alone, to let her know that he will be her new co-worker and to discuss a few details about the job.

Without them knowing why, the System temporarily shuts down, breaking all connections to the CEO (Control and Order). They both perceive their momentary freedom, which triggers their human capacity for empathy as well as their sex drive. The experience opens the door for emotions which in turn result in mixed feelings.

When the System is operational again and they are both once more controlled by the CEO, Spes takes a sleeping Bel to his house.

After that experience, Bel’s unconscious begins to be revealed more strongly and precisely. She has strange, violent dreams every night, that release her repressed thoughts. When awake, she does not want to acknowledge her inner struggle and tries to go on with her everyday life, telling herself that those dreams will go away and trying to believe that her relationship with Spes was also a dream. However, she finds out that she is pregnant and is going to have an abortion. All those contradictions are driving her to madness and she is no longer capable of distinguishing truth from lies. Only the dreams are true, as representations of her inner truth.

Bel cannot make her own life decisions. Once again, she trusts the System to do it for her. Thyr, her boss, persuades her to unplug. When Bel leaves, she looks at herself for the first time and realises the need for self-honesty.

Spes is a System worker, assigned  to watch and test those employees who raise doubts about the statu quo. He was raised and trained by a wise man who gave him knowledge and self-confidence. He is an experienced, extremely versed judge of human character and behaviour. Unlike Bel, Spes carries out his duties always having in mind the global architecture of the system, to which he wants to contribute.

Spes’s method involves addressing the individual under surveillance and, in the course of a conversation, bringing them face to face with their own doubts. Through emotional manipulation combining feelings of guilt, isolation and psychological weakening, people usually end up by requesting to be unplugged to leave the system voluntarily.

Bel’s process was supposed to proceed as usual, but the system’s momentary shutdown and their brief relationship has caused an emotional upheaval in Spes. He finds out that there is a human characteristic, neglected by the System, which may be the key for the survival of the species: empathy.

In order to be with Bel, Spes pretends to be unstable, but during the interview, communication between them is disrupted as emotions run out of control.

Spes eventually goes to his boss, Thyr, to ask him who controls the algorithmic system – if nobody is behind it and everything is ruled by technology, then what are humans turning into? Standing for the current paradigm, which has ended wars and prevented epidemics, Thyr disregards these issues and denies the possibility of any alternative course of action. Spes leaves the office with the conviction that survival is not possible unless humans regain their capacity for empathy. He is determined to find Bel again and to set about changing the system from within.